-- is explained by me over at ChicagoBoyz. Enjoy!

Bag a Near-Earth Asteroid, and Speculate About Catastrophe

Graze on over to Close Approach of Asteroid 2006 VV2 for an overview, then read the aptly titled A Big Chunk of Rock Passes Near Earth for details and charts. Go get it!

Now for the usual fun. The RASC story notes that its likely diameter is within a factor of 2 of 2.2 km (specifically, the Database of Near-Earth Asteroids gives a size range of 1.4 - 3.1 km) and that at closest approach it will be 8.8 lunar distances, about 3.4 million km. Assuming a sphere of density 2.0 g cm-3, its mass would be 11 billion tonnes. Meanwhile, the Sky&Tel story notes: "At closest approach, 2006 VV2 will traverse a degree of sky in a hour." This implies a velocity relative to Earth of 60,000 km hr-1.

Plugging these values into KE = ½mv² (after expressing them in kg and m sec-1) yields 1.6 × 1021 J, and at 4.2 MJ per kg TNT equivalent, it works out to 380,000 megatons, which is roughly what we'd be in for if it hit us. Just about two orders of magnitude larger than all nuclear arsenals combined. Applying the equations referenced way back in Thinking About the Unthinkable, we find a 5-psi overpressure radius -- in general, the you're-dead radius -- of 310 km from the point of impact. That's only 1/1,700 of Earth's surface area, so it doesn't sound so bad; but 70% of Earth's surface is ocean, and the tsunami resulting from an oceanic impact would devastate coastal areas much further away -- my guess would be that every city bordering, say, the Pacific Ocean would have to be evacuated if the asteroid were found to be on a trajectory to impact anywhere in it.

In this connection, 2006 VV2 was discovered four and a half years ago, so it would seem that we would have plenty of time to react if such a dire situation ever came about. But for every asteroid its size, there are 200 that are one-tenth its diameter, and -- all other things being equal -- a hundred times as faint, implying far less warning time, possibly only a few days (see my incessantly self-promoted A Modest Proposal for an Asteroid Warning System and Asteroid Detection, Again for an overdose of background information).

Don't forget to graze around in NEODys while you're at it.

Where I Was, and What I Was Doing

I was at the secure but not undisclosed location from 9-19 March, helping adjacent property owners put in a new water system. Here's some pix (click on images for original size): 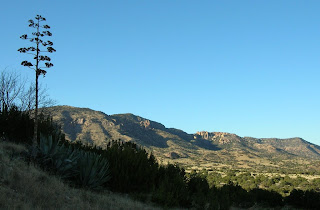 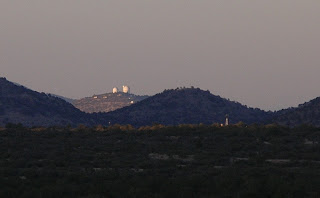 McDonald Observatory at sunset, from my property. 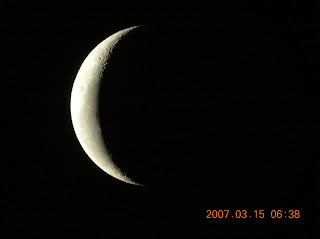 You can never have too many Moon pictures (note to purists inclined to check this against the selenographic colongitude: timestamp is CST [UT-6], not CDT [UT-5]).

On the way back, I took a picture at DIA, which I've posted over on ChicagoBoyz.

(That would be this lunar eclipse.) Various people, including Phil Bowermaster and Rand Simberg, have linked to this amazing presentation of artwork by Rob Gonsalves, who seems to be the MC Escher of our time. I found this piece particularly appropriate: 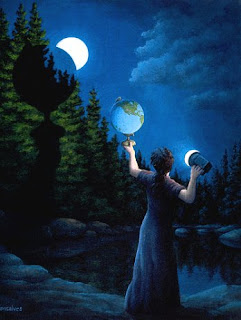 The books from which these images are taken are Imagine a Day and Imagine a Night.

Henry Cate III alerted me that this event is being blogged by several people who are smarter than I am and have more bandwidth besides, so graze on over to:

When More Is Not Enough

-- you need a prescription for Havidol. (Via The Scientist.)

I still wish they called it the Marais des Cygnes Star Party, but anyway, here's the website.

You can read my report from last year's event here; pictures here. 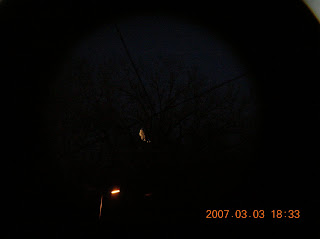 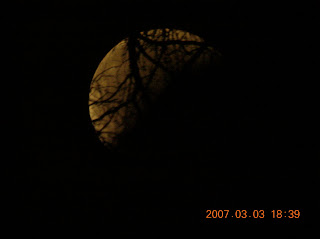 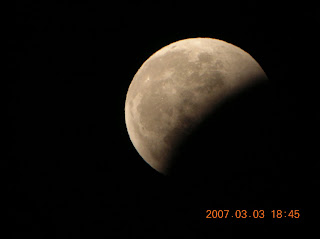 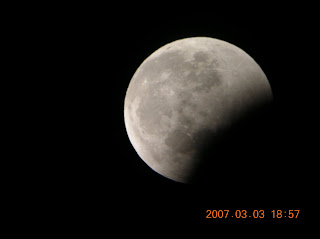 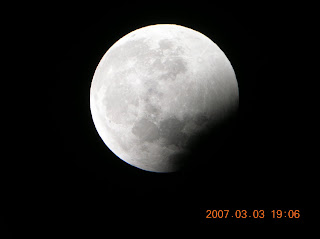 Reasons to Read "Homage to Catalonia"

I wouldn't ordinarily reference something on Townhall.com, but Paul Greenberg has a fine column headlined In defense of Orwell. RTWT.

(You can read the entire book online here.)