Besides shutting down some conspiracy/revisionist history theories, since it's not such an unexplained mystery after all, I think the most important lesson to be drawn is in the final two paragraphs of John Noble Wilford's fine NYTimes story:

There's a world of difference between having a few smart guys around -- even guys as smart as Hipparchos of Rhodes, "who ... might have had a hand in designing the device" -- and having perpetuated institutions dedicated to preserving and transmitting accumulated tecne. Science has no functional existence apart from such institutions.

(As dramatic as the Antikythera Mechanism is, comparable examples exist from other cultures. Bruce Bolt's Earthquakes and Geological Discovery, part of the Scientific American Library series, notes that this passage is a strikingly modern description of the action of a strike-slip fault. But the insight of Zechariah son of Berechiah son of Iddo did not jump-start the science of geology; the requisite institutions did not exist. Similarly, Manfred Schroeder notes in Fractals, Chaos, Power Laws: Minutes from an Infinite Paradise that Pharaoh's dream describes actual events resulting from the "black noise" spectrum of the Nile (f-b, where b > 2). No sudden advance in mathematics resulted -- there was no institution capable of capitalizing on Joseph's interpretation.)

An immediate corollary of this idea is that an attack on science is not an attack on a set of findings; it is an attack on institutions. Science as we know it did not exist in classical times (science falsely so called, indeed), because its institutions did not exist; and opposition to it now, with such shallow motivations as those we see in the ongoing conflict in Kansas, is an ironic and singularly unfortunate violation of this wise admonition.

(Previous member of series here; separately, the esteemed Bill Walker of Mayo points me to Kansas Outlaws Practice of Evolution.)

For Your Listening Pleasure

Pluto's Not A Planet Anymore.

Here is the text, modified so as to embed the links, of an e-mail I just received:

In any given year, amateur astronomers have numerous excellent opportunities to present astronomy to the public, which are a combination of several factors:


Here are some outreach opportunities for 2007, ranked by increasing distance, beginning with terrestrial events and ending with deep-sky observation. Information is derived from websites linked below and from the Observer’s Handbook 2007, Space.com, the US Naval Observatory, and YourSky; it is somewhat specific to the KC area, but can easily be modified for your location.

Graze on over to the International Meteor Organization's October to December 2006 page and skip down a bit:

Here's where the radiant will be -- in the head of Leo, which looks like a large backwards question mark; click on image for full-size (640 × 480) map: 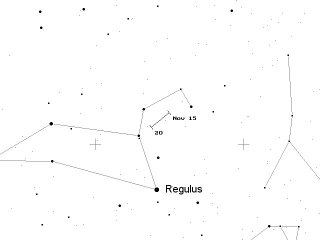 At my latitude (~40° N), the radiant will be rising in the east-northeast around 11 PM CST. If the prediction quoted by the IMO holds up, the first hour or two of Saturday night's portion of the shower may be spectacular for observers in the eastern half of North America.

“Look the storm in the eye”

We twist the world and ride the wind ...

Via The Scientist, I found Redshift Productions, complete with Jovian dog (page down, and ponder what Simak would think). I'm adding them to the blogroll under "Info Sites."

"Our tribe gives no brownie points for communicating with the public," says Carl Djerassi. Time to start handing them out; see the book referenced in my slightly out-of control post The Matter With Kansas (VIII) - Teach the Controversy!, and also this summary of the book's key points.

But I digress. Go get 'em, Redshift. 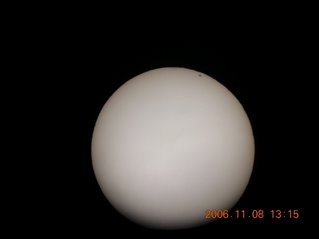 shortly after ingress; Mercury is at ~1:30 position on the Sun's disk 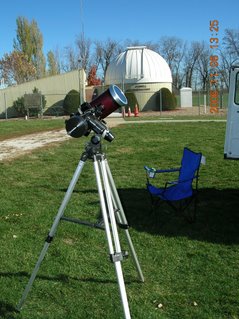 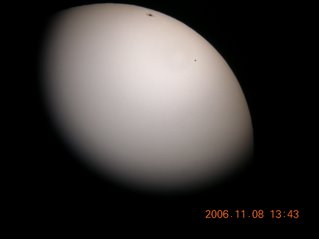 a bit farther along; note sunspot at top 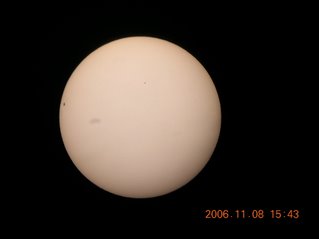 near greatest transit (blur at left center is image artifact) 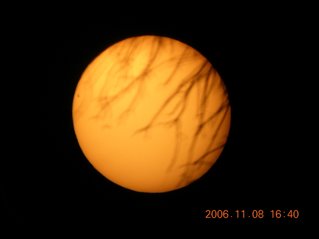 just before sunset; planet visible at 1:30 position halfway from center to edge

This is me during the event. Telescope is described here; solar filter is from HMS Beagle in Parkville. All photos taken with Nikon Coolpix 4800, handheld. 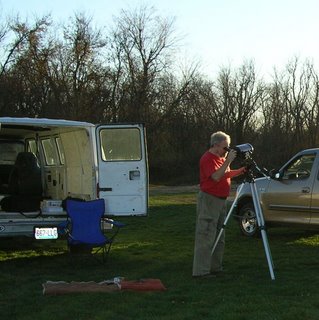 The Transit of Mercury

I am taking the day off to observe it -- weather forecast, as of 72 hours out, is highly favorable, but I want to be able to drive some distance if needed to get clear skies. I will post an update here if there is any organized event at either Powell or Warkoczewski Observatories.

Persons in the US wishing to find out about local observing should contact the nearest club. Finally, the transit will be viewable online at:

Hat tips: Dr Eric Flescher of the ASKC and Francis Reddy of Astronomy.

What I Said Then

For All Saints' Day, that is.