Thanks to Scott Kranz of the ASKC for posting this info on the Yahoo! group ...

Another Thing I Didn't Know Existed (A Continuing Series)

This sort of thing, like ice golf, would be much easier on Titan.

Graze on over to the SOHO MDI Continuum Latest Image page, then break out your (properly-filtered) equipment for a look. After a couple of very quiet years, the Sun will actually be something other than a blank disk for a while. (Hat tip to David Young of the ASKC, who notes that our PST is "just sitting here in storage" -- members can check it out for 2 weeks at a time. Another reason for locals to join.)

Like, you know, this guy. But I'm not just any old blogger; on Arcturus, you get to see the needle going in: 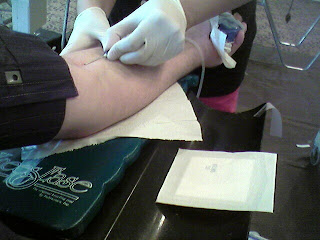 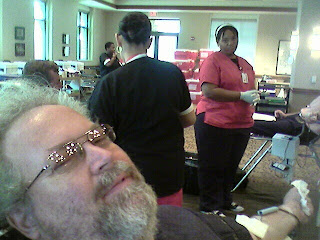 there is no pain, you are receding ... 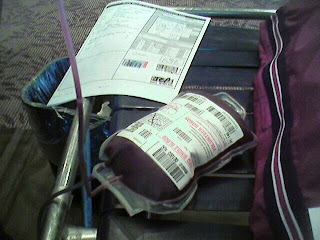 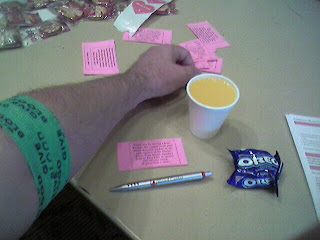 For more information, locals should graze on over to the Community Blood Center website; and also note this upcoming opportunity.

How to Build a 22" Telescope

-- was the topic of the main presentation at last night's ASKC meeting. Here's presenter Fiske Miles demonstrating the finished product (click on images for full-size [640 × 480] versions): 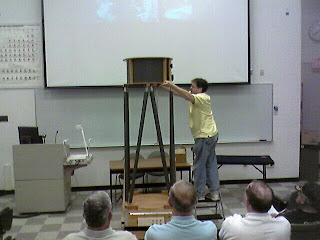 putting the secondary assembly onto the trusses 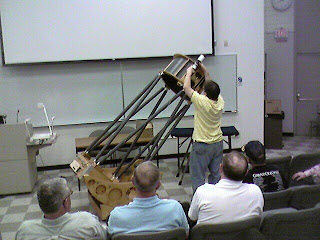 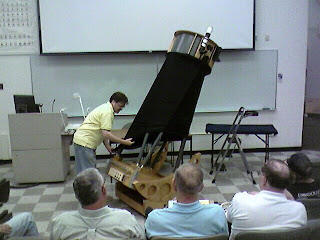 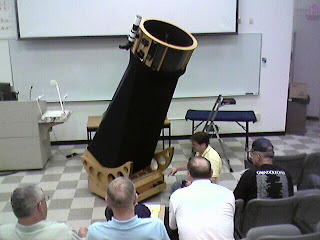 pointing out the battery box 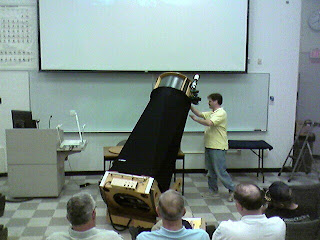 a glimpse of the mirror assembly (at bottom)

The materials weren't too expensive -- maybe $7000, of which $4500 was the mirror, which he bought ready to install -- but the tools were something else: a full wood shop of goodies on the order of $20k. Graze on over to FiskeMiles.com for the complete presentation.

Now let's have some fun. Turning to page 45 of the Observer's Handbook 2007 and exercising some of the formulas found there, we have (with D = 560 mm):

These are somewhat idealized values, given the reality of atmospheric conditions even at good sites (or great ones).

Oh, yeah: shortly before the meeting, your humble blogger got arm-twisted into running for a seat on the ASKC board. Elections are at the next meeting, Sat 23 Jun. I'd like to buy about a million dollars' worth of TV ads, so feel free to contact me via the link at the top of the page and send bundles of unmarked twenty-dollar bills. My platform:

Hey, those are at least as realistic as most campaign promises ...

Greensburg, KS, previously mentioned on Arcturus in Road Trip Report, Stained Glass from the Sky, and When the Stars Fall on Kansas, has been heavily damaged by a tornado.

-- is the subject of my latest offering over on Chicago Boyz. Enjoy!

The latest exoplanet being touted as "Earthlike" is yet another hot Jupiter - though "hot Neptune" might be a better phrase - that has spiraled close enough to its star to have a "surface" temperature in the range that could support liquid water. But Gliese 581 C is dramatically un-Earthlike.

It has five times Earth's mass; it is undoubtedly tidally locked, such that one side always faces its star; and that star is only 1.3% as luminous as the Sun, is substantially less enriched in "metals" (in astrophysicists' parlance, any element heavier than helium), is younger than the Sun, and is variable - thus the designation HO Librae.

What we have here is a planet quite unlike any in the Solar System, orbiting a star equally unlike the Sun, being promoted as a steppingstone to the discovery of extraterrestrial (actually extrasolar) life, in the service of securing funding for, among other things, the Terrestrial Planet Finder. There's nothing wrong with building something like the TPF, though to my mind the funding mechanism is subject to drastic improvement. But the most astonishing discoveries are being forced into a very limited range of narratives to further a limited range of research.

Because what Gliese 581 C lacks is a history remotely resembling Earth's. To quote Timothy Ferris quoting American physicist Thomas Gold (page 338 in the paperback edition), things are as they are because they were as they were. Earth swarms with life, including life recently capable of investigating other solar systems, because it has maintained - with considerable assistance from Jupiter, the Moon, tectonic plate movement, and other influences - a very rough homeostasis for billions of years, punctuated with just enough change, including extinction events of sufficient (but not oversufficient) severity, to drive the development of immense biological variety.

Gliese 581 C has none of this - and equally important, and entirely lost in the employment of this discovery in the "are we alone?" narrative, is that it has its own history, one certainly as astonishing as our own, irrespective of whether it has led to intelligent aliens, or even bacteria.

(Readers wishing to find Gliese 581/HO Librae should read the SolStation.com page linked above, then graze over here; it's about magnitude +8.4, so it should be a binocular object.)

The Dark-Sky Site, venue for the upcoming Heart of America Star Party, is seen from an unusual viewpoint in this 1-minute, 44-second video (warning: 4.4 MB) taken, somehow, by ASKCer Dave Fox, who notes "you might want to turn down your speakers for this (it's loud)" and insists that "no planes or anything at the DSS was hurt in the filming of this movie." Play spot-the-facility, and enjoy!

-- was an event whose anniversary we must never forget. 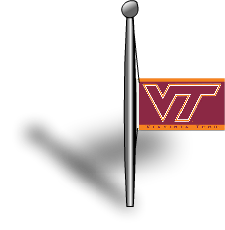 Signs of water seen on planet outside solar system was the lead news headline on Yahoo! this morning. Like most exoplanets, HD 209458b is a "hot Jupiter," making it entirely unsuitable for life, which inconvenient fact doesn't keep the lede from calling this development "a tantalizing find for scientists eager to know whether life exists beyond Earth." Actually, it would have been much bigger news if it didn't have H2O in its atmosphere, but mentioning that would really screw up the we're-about-to-find-alien-life narrative.

That would be 1.5 × 108 km / 1.4 × 106 km, which suggests that for every 110 Goldilocks planets out there, we will be able to observe one by the transit method. As of now, this list has five planets in the habitable zone that are not in unduly eccentric orbits. All are Jovian. We are some years away from the first reliable observation of a terrestrial planet -- in the sense of being even as much like Earth as is Venus or Mars -- transiting its star's disk.

(For comparison, a planet the size of Jupiter orbiting a star the size of the Sun at 0.05 AU would transit, as seen from our vantage point, in nearly one-fifth of cases, and would cause the star's light output to vary by a full 1% every four days. For this and other reasons, hot Jupiters are much easier to find than even vaguely Earthlike planets.)

As with many other endeavors involving leading-edge technology combined with long project timelines, the question arises whether efforts like the Terrestrial Planet Finder, which is funded but has no target date for launch, will be outstripped by nanotechnology in another decade or two.

If you want to observe HD 209458, also known as V376 Pegasi, start here. It will be a binocular object, located west of the Square of Pegasus, and is best seen in the (Northern Hemisphere) late summer or early autumn.

Read Steven A. Shaw's NYTimes op-ed, Take a Rat to Dinner, for insightful commentary on actual vs perceived risk in food safety. His final sentence ends with "... officials should be prioritizing and educating, rather than making decisions based on which YouTube videos upset people the most." I have deliberately elided it thus by way of pointing out that there's an idea with a few thousand other applications besides inspections of fast-food joints.

As noted in my much earlier installment on this topic, torrents of horrific images will be viewed unedited in the near future by vast numbers of ordinary people, thanks to ubiquitous, commoditized bandwidth. Those images will produce, for perfectly good reasons of evolutionary psychology, visceral responses; and if visceral responses are transmuted directly into political intervention, we'll have a whole different layer of risk to manage. Not only officials, but opinion leaders -- and there will still be opinion leaders, even in the decentralized polity of the blogosphere -- would serve us well by growing up a little bit.

Over to you, Dr Cline.

-- is explained by me over at ChicagoBoyz. Enjoy!